Yeah, I'd never heard of it either.

But I'll tell you what, when Europe gets together to put on a show, the sky's the limit.

The Eurovision Song Contest has been going on for like sixty years. Forty-three European nations compete, but only twenty-five are permitted to perform in the final televised extravaganza. Musicians from the twenty-five countries perform their songs one after another in a marathon concert with no commercial breaks. The concert is held in the country that won the contest in the prior year. This year, Serbia.

After all the songs have been performed, the viewing public call in their votes (sound familiar, Simon Cowell?). But (major twist!) you can't vote for your own country. We voted for Latvia. Of course.

After fifteen minutes, the polls are closed and the real fun begins. Turns out, ALL forty-three participating countries get to report their top ten results. Representatives in each country were standing by to read their nation's scores via live satellite feed, and to enjoy their fifteen seconds of fame. It takes a long time.

This was the scene at Andy's house about three hours into the Eurovision Song Contest 2008. 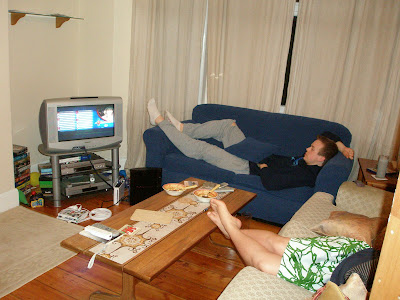 The show was saved by the acerbic commentary of Terry Wogan. His snide observations kept the whole thing just ridiculous enough to stave off pity and just funny enough to keep watching.

According to my British friends, Eurovision is no longer a song contest, but a political popularity contest, with countries voting for their neighbors regardless of their performance. This was the explanation for the UK tying for rock-bottom last. They had a good song, but no love from Europe.

Russia won with a saccharine ballad about believing in yourself.

Here's a clip of the Best European Song.

Naturally, we capped the evening off with a rousing game of Bible Trivia. 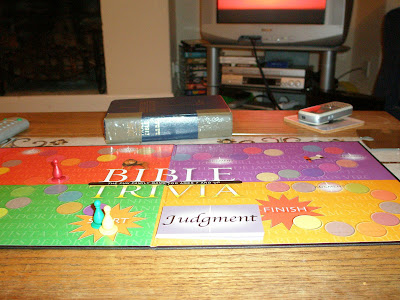 The other day, while digging in my hall closet for some shoes, my belt loop managed somehow to wind itself around the handle of the closet door. This was an unexpected complication in my running-out-the-door plan. I tried to slide it off, but it was really caught and I couldn’t swivel my neck around enough to quite see the problem. I’m not made of rubber, you know.

I stood for a few moments, shoes in hand, door attached to jeans, and reviewed my options:

1. If I was my father, I could pull the Leatherman out of its belt-holster and free myself by either cutting my belt loop (sad) or dismantling the handle. But the dismantling would have to happen blind, with my hands behind my back, and I don’t know if I trust my fine motor skills enough to carry me through the tricky project. This is the same girl who can’t plug in an appliance in the dark. I have to feel for the little holes in the outlet and try to guide the metal prongs to it and I’m always a little nervous about being electrocuted. Plus, no Leatherman. So, moot.

2. If I was Wonder Woman, I could unbutton my pants and pull myself out of them using nothing but upper body strength and the door jam. But, as we all know, Wonder Woman doesn’t wear jeans (it’s like her kryptonite).

3. I could wait for the next two hours until the guys across the hall got home from work and then yell at them through my front door. But, I couldn’t open the front door unless the closet was closed, and I couldn’t close the closet unless I was inside of it. And they already think that I’m nuts.

For those of you who want closure, I went with option four. Eventually, through some very complicated maneuvers that I’ll never be able to replicate on the dance floor, I was free.

But other than the danger of freak belt-loop-induced starvation, the solitary life ain’t bad.
Posted by jessi at 10:17 AM 3 comments: 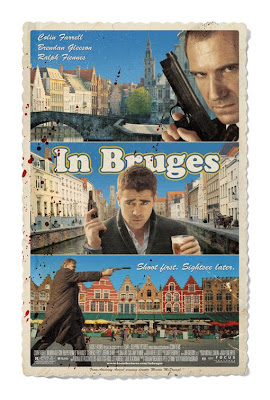 The characters are multi-faceted. The plot is an oldie but goodie.

Just remember that it's all ketchup, and you'll be fine.
Posted by jessi at 3:22 PM 3 comments:

My mom is great. Pretty much everyone knows that.

Here she is with JR and baby Jill about a year and a half ago. 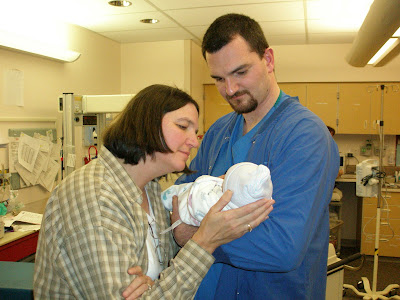 I have no idea what the temperature is, and this is because of history.

Once upon a time, two scientists, Dr. Fahrenheit and Dr. Celsius-Centigrade fell in love with the same woman.

The men, formerly best friends forever, fought over the beautiful Dr. Kelvin. They stopped speaking to one another, and even parted ways professionally, dividing their years of research between them.

However, as it turned out, Dr. Kelvin wasn't interested in either of them, but was only trying to get close enough to steal valuable information about how to get the mercury to go up that little tube.

So through the tragic combustion of fate, science, and love, we now have to deal with three separate ways of measuring the temperature.

They gave Kelvin absolute zero - because she was so cold.

Anyway, that's why I can't tell you exactly how warm it is outside. But it's nice. It's weather that makes you want to be out in it.

The girls enjoy a little sunshine after class. 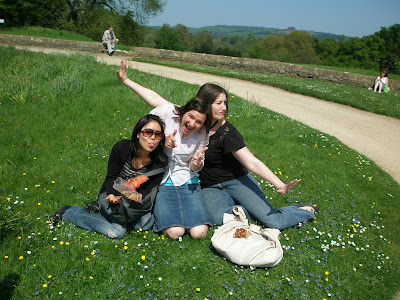 Kim and I had a picnic in front of the Royal Crescent on Friday... 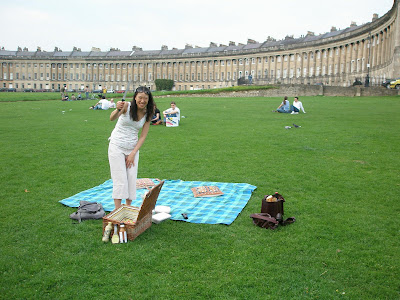 ...but a thunderstorm drove us indoors for pudding and Seinfeld. Not a bad evening. 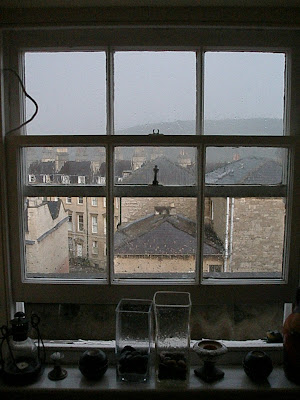 Did you cry in Finding Neverland? Me neither. That would be stupid.

Remember swimming? Going to the pool for open swim on Monday nights, with the kick-boards and the pool noodles and the clamor? Wearing the skin off your toes on the rough cement floor?

You could pick people up in the pool – even really big people like grownups. I mean, you could actually lift them, not take them out on a date. You could do flips and handstands. You could float.

Remember those oversized lifeguard chairs and that big giant clock?

Our hair would freeze when we walked out to the car – even our nose hairs. Our eyes would burn and itch because, for some reason, they never got the chlorine levels quite right in Seward. We would lay on the living room couches, disinfected, damp and exhausted and my mother would listen to the silence and thank God yet again for swimming pools.

In college, there was a short time when Sam and I would go swimming every morning. This was a big step for us – Sam with her fear of sharks and Jessi with her fear of exercise. But it was good, using all those childhood strokes. Listening to my thoughts underwater.

It has worked out pretty well, although people don’t take as kindly to a grown woman showing off her aquatic strength.

2. Holiday planning – we are going to go EVERYWHERE this summer!

3. Flannery O’Conner – seriously, why does anyone write anymore? Have you read her stories? Unbeatable.

4. The elliptical. That’s right, you skeptics! Forty minutes. Three days a week. Give or take.

5. Losing my wallet. Actually, I’m not so into that.

6. The Word in Action series at Widcombe – it had a very promising start last night

7. Dancing with strangers – I just can’t stop the beat! Must be all that natural rhythm.

8. Lost – are they seriously all dead?

9. Having people over (but if there are more than three, then someone has to drink out of a jar)