Dear Makers of the the Snuggie™,

I'm about to make you a million bucks.

Please don't scoff at me.

I know that you've already made a million bucks. I know that your cheap polyester fleece "blanket" with "sleeves" has swept the fad-sappy American psyche - hemorrhaging dollars.

But I'm telling you as a friend that you guys have missed the marketing boat.

If you look at any officially endorsed Snuggie™ commercial, you will most likely see some woman with a Dorothy Hamilton Haircut and a Dolly Parton Smile cozied up on some studio couch, working a crossword puzzle while draped in a bright blue blanket (with "sleeves").

Never has this image appealed to me, Makers of the Snuggie™. Too many times have I been burned by QVC and her evil cousin, the in-flight magazine, to be taken in by such a gimmick. A blanket with sleeves? I already have blankets! I already have sleeves! Lots of both! Also, I'm horrible at crossword puzzles.

So, even though Jimmy Fallon featured the Snuggie™ on his hip, new show targeted directly toward young professionals in their mid (late!) twenties, I wasn't buying. Not even those cool guys from Roots could convince me.

But, MotS™, you'll be happy to hear that this is not where our story ends.

Because everything changed when I journeyed from my home in the wilds of the Alaskan wilds through the Lincoln Tunnel and into the heart of New York City. That's right. The Big Apple. The mecca of all things fashion.

And it was there that my impression of the blanket with sleeves was subverted. Was turned inside out. Upside down. Or, more literally, back to front. My new friend Ginger had a drafty apartment. But what was that she was wearing to keep warm? Some kind of designer wrap? Some cutting edge leopard-print fashionista experiment?

Whatever it was, I wanted one. I wanted ten.

A Snuggie™ may just basically be a robe worn backwards, but that does not mean that a Snuggie™ worn backwards reverts to a robe. Oh no no no. It is way cooler. Hem sweeping the floor behind you. Monkish sleeves. A massive cowl neck. Who doesn't look awesome in a cowl neck?

Elegant. Cozy. It's like Cruella DeVille's car coat, except it's not made from puppies.

Get a Snuggie™, but don't wear it like an out-of-work ice skater trapped in a hospital gown. Spin it around. Elongate your vowels. Smoke with a cigarette holder. It's 2010 after all, dah-ling.

If you employed this approach, Makers of the Snuggie™, maybe people would actually start buying your product.

And I expect a percentage.

Life on the Range

Many may think that something was lost with the advent of highways and property lines and barbed wire. That the Great American West, full of migrating tribes of people and herds of animals, swirling around the prairie like air currents, is gone forever.

But take heart! There is still a place where discouraging words are seldom heard. Where the deer and moose play in the street. Where the biting, incessant wind pushes cloud formations across the sky, so rarely is it cloudy all day. That place is Lazy Mountain.

Most recently, the buffalo roamed over to my parents' house. 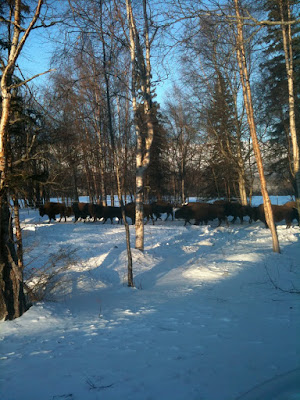 They were quite orderly about it, and everyone stayed together. 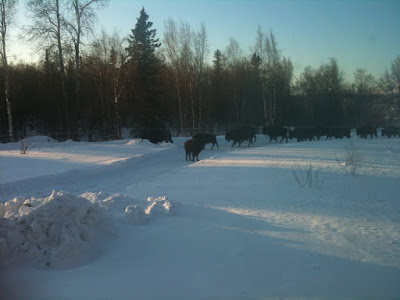 Maybe to borrow a cup of sugar for some neighborly cake they were baking? 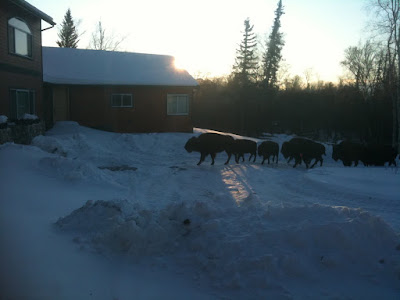 Now, in the interest of full disclosure, I should mention that these tatanka were bred in captivity and destined for the slaughter shed. So Dances with Wolves this is not.

But still, it was kind of fun.

Ooh, and speaking of ranges. After a year and a half of hotplate cuisine, I finally got a stove!
Posted by jessi at 2:26 PM 1 comment: